Over the past 30 years San Francisco’s middle-class neighborhoods have been decimated. In 1990, 60% of San Francisco residents lived in middle-class areas, but by 2010 that number had dropped to 41%. Given current trends, the next census report (in 2020) will almost certainly show an even smaller middle-class in San Francisco. These facts are not surprising, as the tech boom has made San Francisco a poster child for economic inequality. Countless think pieces have been written about the city’s problems with exploding rent, gentrification, and a widening income gap.

I wanted to add to this discussion by creating a series of maps showing how San Francisco’s inequality is distributed across the city. These were inspired by Daniel Kay Hertz fantastic series of maps visualizing inequality in Chicago. The maps below show a city that was solidly middle-class as recently as 1990, but has quickly become sharply divided between homogenous upper-income neighborhoods, and areas that are overwhelmingly low-income. Census block-group data was used, with the median income of each block-group compared to the median income of the San Francisco-Oakland metropolitan area. Low-income areas are colored red, middle-income areas are colored light-grey, and upper-income areas are colored green.

Neighborhoods that were middle-income in 1990 saw the greatest changes in their median income. 14 neighborhoods transitioned from being middle-income in 1990 to being upper-income in 2010, including Potrero Hill, the Financial District, the Marina, the Castro, and Inner Sunset, to name a few. A prime example of this trend is Noe Valley, which in 1990 had a median income that was 105% of the metropolitan area median, solidly middle-class. By 2010 Noe Valley had jumped all the way up to making 155% of the metropolitan area median, and was firmly in the upper-class range. 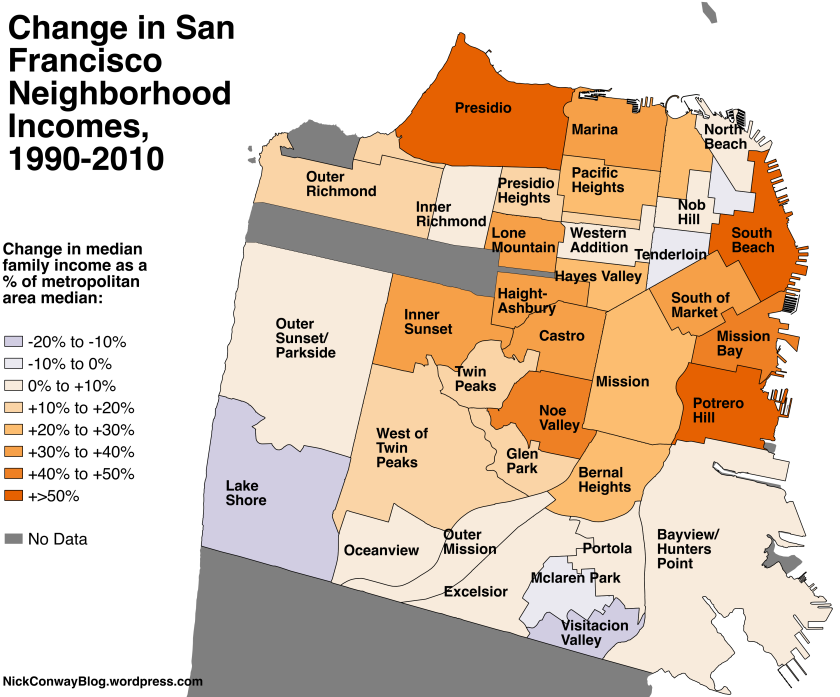 Two neighborhoods that were middle-income in 1990 became lower-income by 2010, Visitacion Valley and Lakeshore. These two neighborhoods sit on the border of San Francisco’s city limits, and their decline in relative incomes was likely caused by working-class residents from other parts of the city moving there seeking out cheaper rent.

As for the area’s poorest neighborhoods such as Chinatown and the Tenderloin, they saw their incomes fall slightly from 1990 to 2010 (relative to the metro area). These neighborhoods have been left behind in San Francisco’s boom times, which contributes to the huge gap between the rich and poor in the city. It will be interesting to see if their median incomes rise by the 2020 census due to an influx of young professionals seeking out cheap rent. It’s also possible that these areas may benefit from the city’s low unemployment rate, with a recent report suggesting that San Francisco’s poorest resident have seen some economic gains. Nonetheless, it is disturbing that San Francisco’s tech boom has not increased incomes much for the neighborhoods in the most dire need of a raise.

Lastly, there were three neighborhoods that were already upper-income in 1990, Seacliff, Presidio Heights, and West of Twin Peaks. These neighborhoods all saw moderate increases in their relative incomes. But generally, they did not see as big of rises as areas that were middle-income in 1990. This makes sense, since their rents were already expensive in 1990 and they had less room for their incomes to grow.

Overall these maps and statistics tell the story of a city that is moving farther and farther away from an egalitarian distribution of wealth. As rental prices continue to increase, more and more areas of San Francisco will become unaffordable to the middle-class. The speed of this transformation is terrifying and depressing, but it also means that it was not long ago that San Francisco was significantly more egalitarian. Looking at the 1990 map of San Francisco’s neighborhoods shows a city much more open and available to people of average means. It is important that we don’t let the memory of that older San Francisco disappear.

23 thoughts on “The disappearance of San Francisco’s middle-class neighborhoods, 1990-2010”